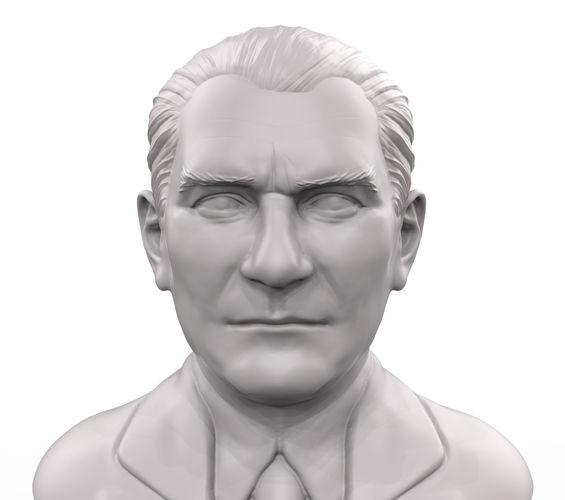 Browse my profile to find many more historical, political and celebrity models. Contact me if you need custom work.

Part of Ataturks fascinating bio (Wikipedia): Turkish women received equal civil and political rights during Atatürk's presidency ahead of many Western countries. In particular, women were given voting rights in local elections by Act no. 1580 on 3 April 1930 and a few years later, in 1934, full universal suffrage, earlier than most other countries in the world. He was hero of battle of Gallipoli during WW1. Following the Empire's defeat and subsequent dissolution, he led the Turkish National Movement, which resisted against the mainland Turkey's partition among the victorious Allied powers. Establishing a provisional government in present-day Turkish capital Ankara, he defeated the forces sent by the Allies, thus emerging victorious from what was later referred to as the Turkish War of Independence. He subsequently proceeded to abolish the decrepit Ottoman Empire and proclaimed the foundation of the Turkish Republic in its place.

As the president of the newly formed Turkish Republic, Atatürk initiated a rigorous program of political, economic, and cultural reforms with the ultimate aim of building a modern, progressive, and secular nation-state. He made primary education free and compulsory, opening thousands of new schools all over the country. He also introduced the Latin-based Turkish alphabet, replacing the old Ottoman Turkish alphabet.