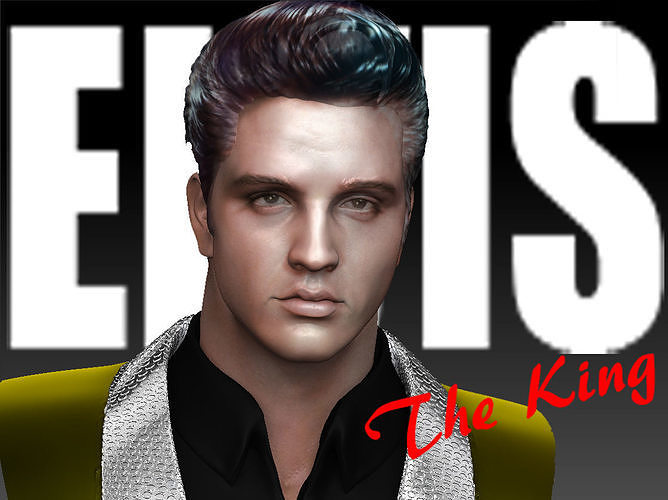 Captured in his Golden Suit era. Portrait 3d print model of the legend of music created using many reference photos and textures of Elvis's skin. The textures of the file are real Elvis photographs.

Elvis Aaron Presley (January 8, 1935 – August 16, 1977), born in Tupelo, Mississippi, is an American singer and actor. Regarded as one of the most significant cultural icons of the 20th century, he is often referred to as the King of Rock and Roll or simply the King. He influenced numerous musicians and billions of fans.

The sculpt was created meticulously, to copy the original. Many reference photographs were used and many people's oppinions were asked during creation to achieve the likeness with Elvis.

The 3d file contains Obj and Stl files with textures, available to print on color 3d printers, along with usual solid color printers.

The default 3d files dimension is 333mm tall. You may rescale at any desired size.

Own a portrait of the King, Elvis Presley, in your own home!

A must have for every Elvis fan and music lover!

He left the building, He went home, but now He is back!

Thank you! Thank you very much!