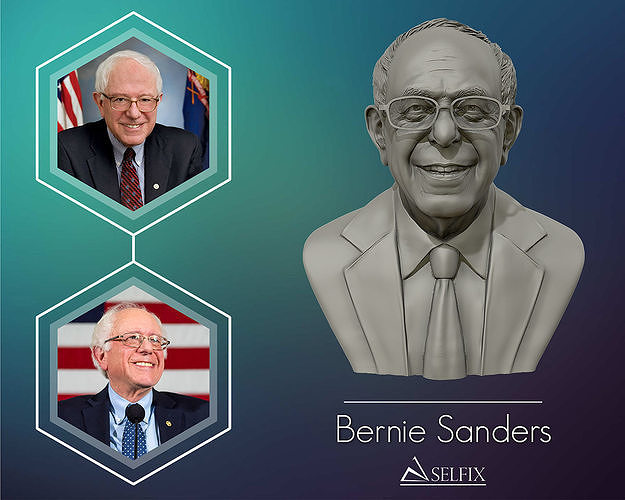 the bust sculpture of Bernie Sanders, ready to 3D print in any size you want

Bernard Sanders (born September 8, 1941) is an American politician who has served as the junior United States Senator from Vermont since 2007 and as U.S. Representative for the state's at-large congressional district from 1991 to 2007. Sanders is the longest-serving independent in U.S. congressional history, though he has a close relationship with the Democratic Party, having caucused with House and Senate Democrats for most of his congressional career.[2] Sanders ran unsuccessfully for the 2016 Democratic nomination for president and is running again in 2020. Before entering each race, he pledged to serve as a Democrat if elected.

An advocate of social democratic and progressive policies, Sanders is known for his opposition to economic inequality and neoliberalism. On domestic policy, he supports labor rights, universal and single-payer healthcare, paid parental leave, tuition-free tertiary education, and an ambitious Green New Deal to create jobs addressing climate change. On foreign policy, he supports reducing military spending, pursuing more diplomacy and international cooperation, and putting greater emphasis on labor rights and environmental concerns when negotiating international trade agreements. Commentators have described his political philosophy as aligned with the New Deal policies of President Franklin D. Roosevelt and the Nordic model, noting the strong influence his views have had on Democratic Party politics since his 2016 presidential campaign.[3][4][5]

Sanders was born into a working-class Jewish family and raised in the Brooklyn borough of New York City. He attended Brooklyn College before graduating from the University of Chicago in 1964. While a student, he was an active protest organizer for the Congress of Racial Equality, as well as for the Student Nonviolent Coordinating Committee during the civil rights movement. After settling in Vermont in 1968, he ran unsuccessful third-party political campaigns in the early to mid-1970s. As an independent, he was elected mayor of Burlington in 1981 and reelected three times. He won election to the U.S. House of Representatives in 1990, representing Vermont's at-large congressional district; he later co-founded the Congressional Progressive Caucus. He served as a U.S. Representative for 16 years before being elected to the U.S. Senate in 2006; he was reelected to the Senate in 2012 and 2018.