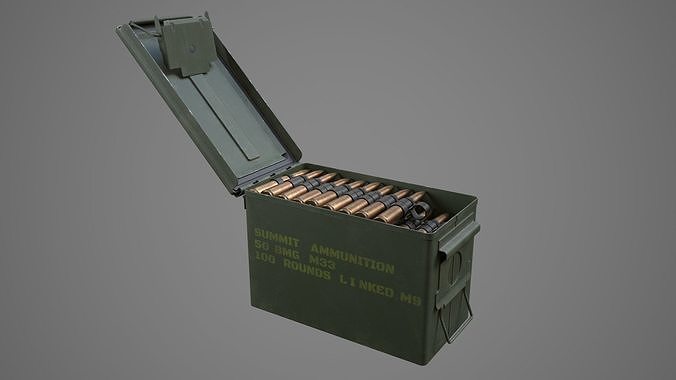 Many would think it's easy to model something like an ammo can and would approach such project without enough respect thinking after all, it's just an ammo can, how cares? Well I do. This is a historic piece now, first introduced in the 50's.

The steel M2A1 Ammunition Can / Box was introduced during the 1950s for .50 caliber machine gun ammunition, replacing the M2 .50 cal. ammunition can / box. The M2A1 ammo can was designed to hold link belts of 100 cartridges of .50 cal. ammunition for the M2 Browning machine gun, but was in fact utilized to transport and store many other ammo calibers and packaging.

This ammo can is meticulously modeled down to the smallest parts to capture all details. Efficient modeling eliminates the need to further subdivide (smooth). N-gons are present on flat surfaces. Support edges are present for shading and further subdivision should you still need.... you won't All parts are named, grouped and UV-ed. Bonus 50 can bullet for the M2 Browning HMG with M9 links.

Native Maya file contains 3 V-Ray lights. Among textures you will find a SoftBox texture that was mapped into the lights. IBL that was used for ambient lightning cannot be provided for legal reasons. (Just add in yours)

Non Maya users: Please use FBX if you want proper grouping. OBJ does not contain groups and you will have all bulletts and parts in outliner.

Bullets are included for presentation. If scene is heavy use referencing or other methods in your 3d software to keep things light.

Enjoy using this model as much as I did creating it.