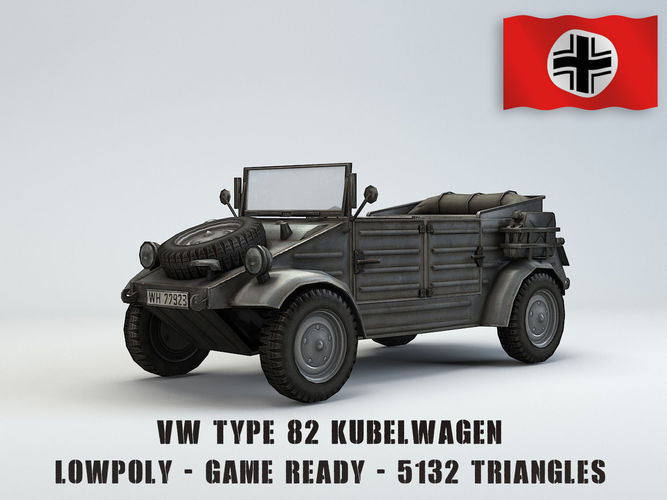 The Volkswagen Kübelwagen , literally,Tub" car, previously mostly used for rail, industrial or agricultural hopper cars) was a light military vehicle designed by Ferdinand Porsche and built by Volkswagen during World War II for use by the German military (both Wehrmacht and Waffen-SS). Based heavily on the Volkswagen Beetle, it was prototyped as the Type 62, but eventually became known internally as the Type 82.

Kübelwagen is an abbreviation of Kübelsitzwagen, meaning bucket-seat car because all German light military vehicles that had no doors were fitted with bucket seats to prevent passengers from falling out[dubious – discuss].[2] The first VW test vehicles had no doors and were therefore fitted with bucket seats, so acquiring the name VW Kübelsitzwagen that was later shortened to Kübelwagen. Mercedes, Opel and Tatra also built Kübel(sitz)wagens.[2]

With its rolling chassis and mechanics built at Stadt des KdF-Wagens (renamed Wolfsburg after 1945), and its body built by US-owned firm Ambi Budd Presswerke in Berlin,[3] the Kübelwagen was for the Germans what the Jeep and GAZ-67 were for the Allies."