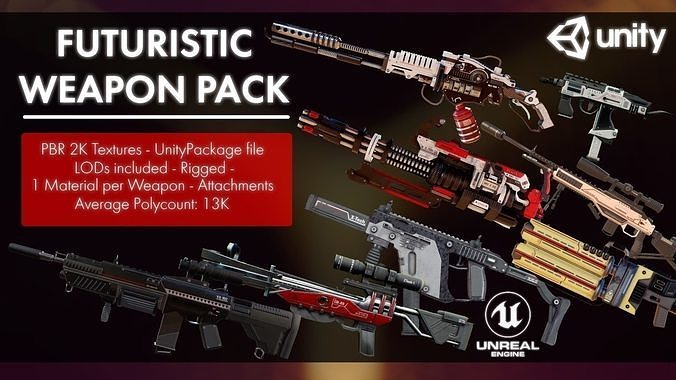 This weapon pack contains a .unitypackage file that can be used in Unity and an Unreal Project to use in Unreal Engine!

Please note, this is a Unity Package file which is intended to be used with Unity Engine 2017 and newer.

Please note, pack was made in Unreal 4.21

Here's how you can import it in Unity: https://docs.unity3d.com/Manual/AssetPackages.html Pack contanis instructions on how to import the pack to your Unreal Project.

1 Material per weapon. This is a package of 25 assets: Assault Rifle

Weapons and their parts are properly named. Every movable part is a separate object and has its own bone in this weapon's rig. You can animate triggers and ejectors, detach scopes and certain attachments.

LOD1 is included, LOD1 models have 30% decreased triangle count. It will help you optimize your game better. Each weapon uses only one material.

Each of these is rigged , textured and ready to use in your game projects. Weapons are approximately scaled to fit a standart Unity Ethan character. Animations are not included in this asset pack. Sound are not included.