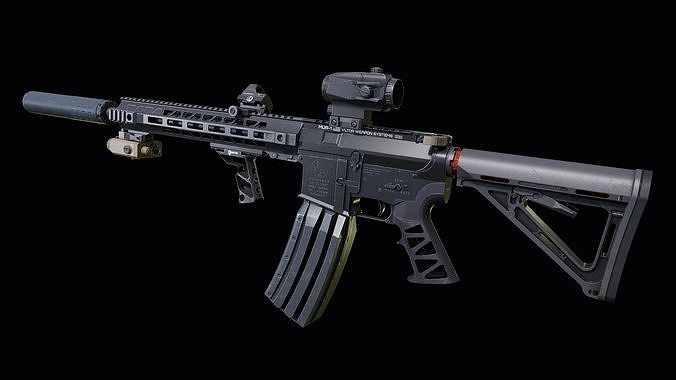 High resolution textures made for physically based rendering (PBR) shader system exported out of Substance Painter(7.1.1) as such required texture maps as:

Model unwrapping made on only 2 texture atlases. For better use of UV space, some inconspicuous parts that are on the other side, repeated small details have been unwrapped by overlapping (sides of the Handguards, stock, grips, etc.) Also Scale of inner unnoticeable parts decreased in UV space. That does not affect the quality of the textures and the general appearance of the model. The value of Texel Density: 64-65 pixels/cm (with 4k)!

Additionally, there are sets of textures without logos and engravings.

After importing the model and the textures into the target engine you have to follow the official engine documentation on how to set the material up!

All content of this model is packed into .rar archives, names of textures, formats, materials, etc. have the correct names. Folders and archives have very easy to understand names.Also for your comfort there are Readme files in every archive with the description of what this archive contains.