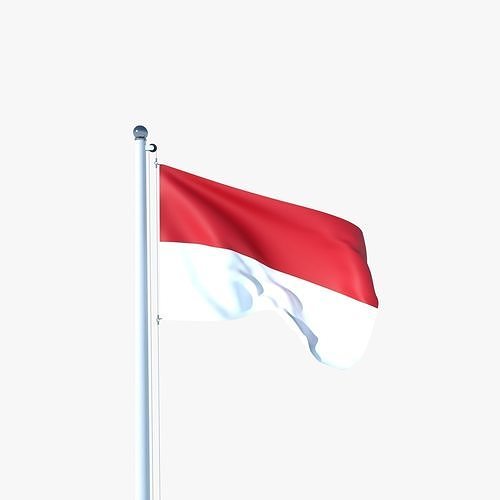 3D model of animated pole with flag of Indonesia on it

Animation can be as long as you need

The Flag of Indonesia is a simple bicolor with two equal horizontal bands, red and white with an overall ratio of 2:3.

The Flag of Indonesia is a simple bicolor with two equal horizontal bands, red (top) and white (bottom) with an overall ratio of 2:3.[1] It was introduced and hoisted in public during the Proclamation of Indonesian Independence on 17 August 1945 in at 56 Jalan Proklamasi (formerly Jalan Pegangsaan Timur) in Jakarta, and again when the Dutch formally transferred sovereignty on 27 December 1949. The design of the flag has remained unchanged since.

The flag of Indonesia is graphically similar to the Flag of Monaco, with a slight difference in the shade of red, and ratio of its dimensions. The flag of Poland has similar dimensions but has the colours reversed: white on top and red on the bottom. In both, the red is of a slightly darker shade.