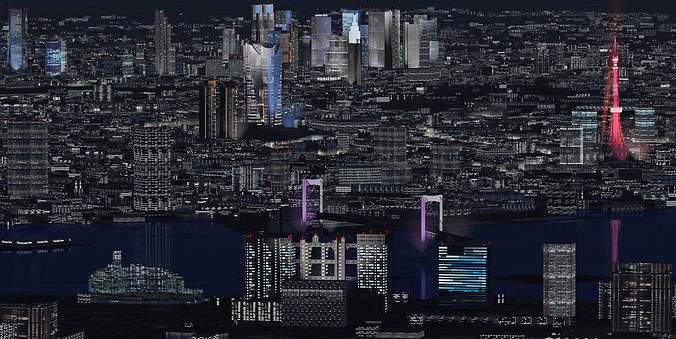 3D model of Tokyo at night, which includes most of the metropolitan area, as well as Mount Fuji. Real scale model.

In a 3D model of Tokyo, you can see famous city landmarks.

See additional information and our 3D models of other cities: https://cih.ru/j3/855.html

Tokyo Skytree Tower, which rises to a height of about 634 meters, claims to be the tallest structure in Japan. Inside this tower, located in the Sumida district, you will find a large shopping mall as well as a restaurant and observation deck. At night, Tokyo Skytree shimmers with blue and pink colors.

Edo-Tokyo Museum is a history museum that will take you back in time and show you how Tokyo has developed over the years. Here you will find old maps of the city, amazing models of old feudal houses, miniature models of various structures such as the Nihonbashi Bridge, banks and theaters, and even the walls of the old city.

Tokyo tower: The structure is instantly recognizable as it looks like the Eiffel Tower in Paris. The main value of the Tokyo Tower is the presence of an observation deck with magnificent views of the city.

Also in 3D model of Tokyo:

Native model format is Cinema 4D, all other formats is conversion from it. You can contact us if you need other formats, versions or improvements to the model.