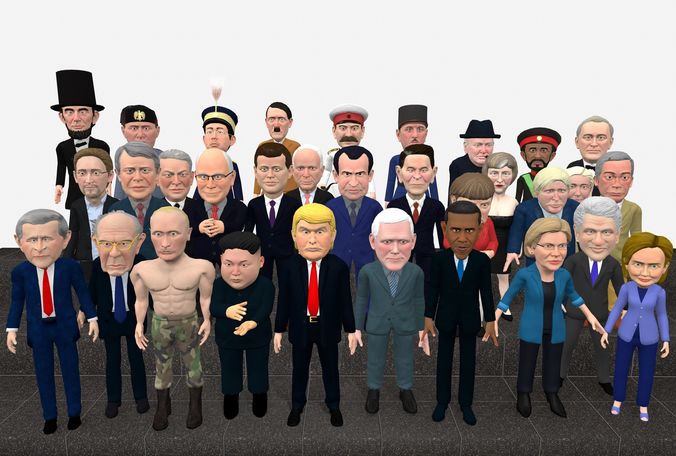 All political caricatures are work of art. I personally sculpted them manually in sculpting program, details are baked on normal maps, they are textured by hand and zero copyrighted content was used in their creation. As such, they are legally free to be used in your commercial projects.

You can test to see if my caricatures will be suitable for your projects before buying by downloading my free: Elizabeth Warren https://www.cgtrader.com/free-3d-models/character/woman/elizabeth-warren-caricature

All above characters are available in their smaller packs. Pack 1, pack 2 and pack 3:

Each character have one custom legacy animation, as in Demo scene . Hitler have 5 custom animations, Kim have 7 animations, Stalin have 2 animations as well as two texture uniforms (white and grey blue). FDR have two animations, one special animation with him on wheelchair.

In pack Maya and FBX files for each character are included. Bout rigged in T-pose and animations.

Unity pack with all 32 of them in one scene is also included.

Models are rigged in Maya. Basic biped rig was created and weight painted, plus additional joints for eyes, jaw and eyelids are added. For humanoid animations use prefabs from prefab folder.

If you like my style and would need to have custom characters created for your projects, feel free to contact me for freelance work