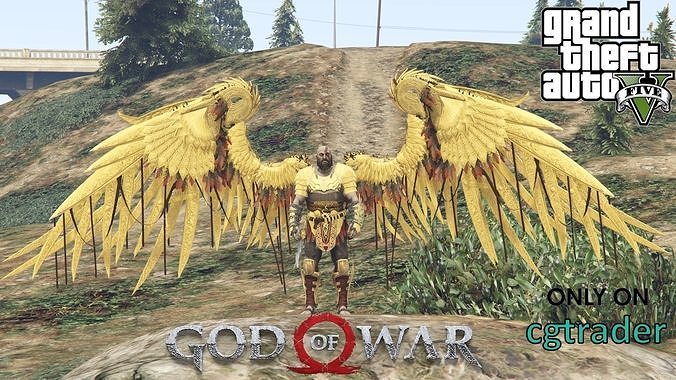 !!!TO ALL REGULAR 3D MODEL BUYERS EXPLORING CGTRADER, THIS IS NOT FOR YOU, THIS IS FOR MY PEOPLE, THE GTA V MODDERS ON PC!!! BUYER BE AWARE!.

First, A grand thank you for all those who find my work on Kratos worth the buy. You boys just remember, what you see is only what's in there SO FAR, There are Plenly of other armors, variational items, Custom Poses I'm going to be adding. Enjoy.

There will be a coming God Of War powers script, I'm very excited to see when it begins. >:}

Funny thing is I never originally planned to make the Valkyrie Wings and Hermes winged boots. ^O^ So, after I was done with Kratos UHD(Basic) and now fighting against the other enemy player Scripts, I noticed that unfortunately Kratos didn't have too much that he properly could do. I try not to disrupt the natural order, Like just throwing the Superman script or some Other random powers on him just because I can, NO, I Wanted him to have the proper RIGHT to fly, So I gave him Valkyrian Wings! >:} Wanted him to have the RIGHT to move fast with agility, So I gave him back his Hermes Winged Boots. >:} The way I see it, Valkyrian Armored Wings + Hermes Boots = Allowed Fast Flight

-To Whom It May Concern: I want you boys to understand the meaning of me making this ped, I was on Hiatus for very long time away from GTA ceation... Understand that the process of me making Kratos and all of his special armors and pieces(still more to come) are the very core STARTING reason I was able to get back the encouragement and fire to make the Custom ANIMATIONS I've put out so far(in JulioNIB's Discord server) that all of you seem to like, and the Peds coming soon to 5mods. Don't thank Me, Thank KRATOS for this, for NO OTHER project could've brought me back to life like Him. Peace..