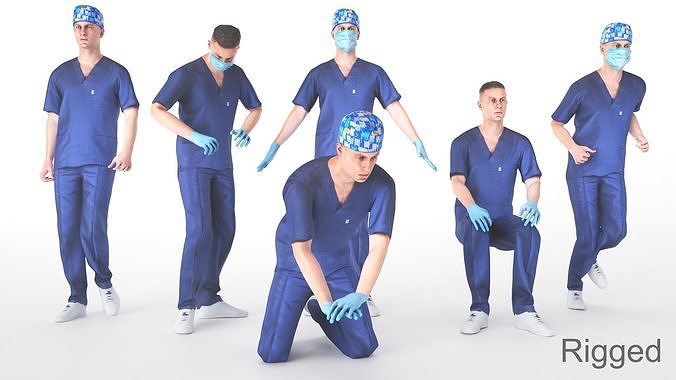 This is a 3d scanned model made with photogrammetry technique in our own custom built 3D scanner equipped with Canon 200D cameras. This scan was processed through Reality Capture and retopologized automatically via ZRemesher within Zbrush.

This is a true human size detailed model of man Caucasian appearance dressed in a uniform of a surgical doctor. The model is captured in the A-pose. Cleaned via Zbrush, re-toped via Wrap3. Rigged via Mixamo, waighted and saved as fbx format animation.

The product is ready for immediate use in architectural visualisations, inside Game Engines or for further render and detailed sculpting in Zbrush.

BONUS: in this package you will also get a high-poly (.ztl tool) of raw 3d scanned model in zBrush, thus you’ll be able to make a super-cool editing of the purchased product.

ABOUT US: we are photogrammetry studio based in Kyiv, passionate about 3D world. We do full body scanning, 3D scanning for VFX and Gaming, as well as post-production, including model clean-up and rigging, hair and clothes reconstruction and simulation, deep PBR texturing, set of expressions ready for blending. Most of all we love to create a character from scratch. We transform your idea into high quality animation-ready 3D model with PBR texture set. So stay tuned and follow us!