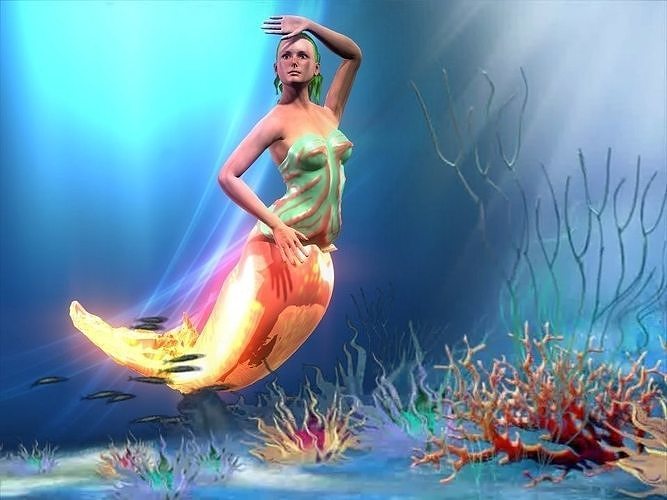 I am sick , an it seems there are developments at the site so I decided to have a break from work for while , today we have a Mermaid .

Just to hide the legs of the character .

Of course a lot of peoples love the mermaids , the fantasy pretty creatures with half pretty lady and half fish , some says that they are monster and looks pretty to attract the sailors to sink and hunt them and eat them , or they transform them to mermen .

Some says the have a magical powers , and some says they are the daughters of posidon the Greek god of sea or neptun I am not sure , and some says there is a hidden kingdom under the sea where they lives , and some sais that they saw them on reality , some guys said that earlier before even my birth , there was two men walking night at the beach and the technology was not very good like nowdays , so there was almost no light , only the lonely moon watch and throw it's light on every thing , so they saw a figure of a lady play with her hair , but her face was so ugly , and her lower body in the water , but it did not looked like clothes or human skin , it looked like a fish skin , and she was calling the name of one of those two men , of course this was elf or Jin , because they can be formed at whatever they like , also o one until now could know all of their types , so he mermaids may be type of elves or Jins , they are the same for us .

May be she wanted to harm this man or may be she liked him , or may be she wished to warn him from some thing , but he did not reply for her calling because he was scared of her , of course especially she was knowing his name while he never seen her before , now days the man kind and people spreaded in many places and the cevilization of humans grew larger , then the Jin had to retreat to their hidden realms to live there far of humans , but some times they go to the abandoned houses and empty erias like deserts , woods , and some said they split the sea and live beneath it .

There are many stories to explain about The jins , but we are talking just about mermaids here , so I tell you do not worry , because the Jin as the humans , there are evil jins but also good jins and there are stories of course about them , there are those types who just want to live in peace and hate the intruders , so as they are invisible creatures always the give the intruders signs to show their objection about their exising in their places by moving so fast like winds , or knocking the doors or appear from no where just for curusity to watch the humans interuders from a closer points , or some times they like playing and even helping the humans , so as a jin called a mermaid , there can be a good pretty mermaids like Ariel from Disney princesses , so do not worry , just if you met a Jin one day do not try to harm them because they are souls like us .

to A Mermaid low-poly 3d model