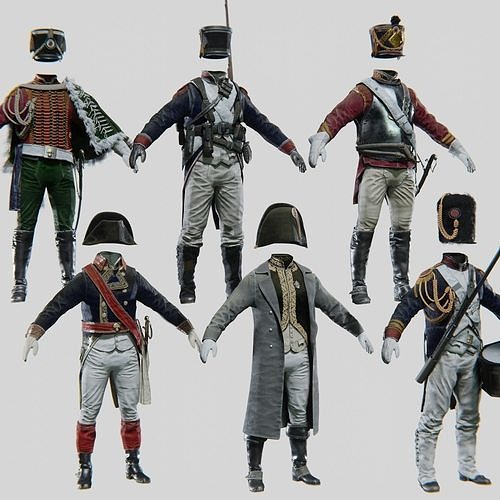 3D French napoleonic uniform from the french empire Grande armée modeled in high precision._ this is a mix between several references i found. this model has been accurately recreated in 3d High poly to keep every details.

The Quality you need : First of all, this model was based on a several pictures and close up of the real product to provide you the best quality in terms of texture references and proportions. All Preview Pictures on the product page are rendered with the provided model and textures ( Environment Lighting is not provided )

The entire model was textured with its accessories relying on references and actual products. Textures may need to be relocate after uncompressing the Texture file into your production folder. If you are using another software, you'll need to recreate a PBR metallic roughness based shader and connect the UDIM textures into it.

Royalty Free License ( Cf Cgtrader Terms and conditions ). Can be used in any type of projects : Image, render, vfx, commercial, Nft, video, film, games. Reselling Any parts, modified parts, baked Geometry or texture, or any ressources or modified ressources from this model in any form is not allowed. 10 3d Print per license ( One buy = One License )