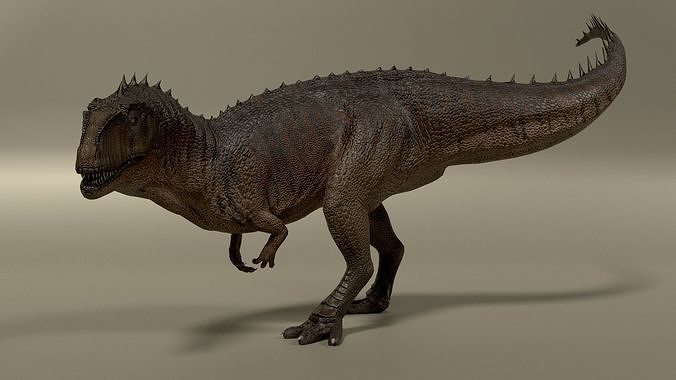 A Giganotosaurus asset pack made in blender containing animations, skins and LODs!

Write comment
Wow, nice work
caro
de mais
Hello it looks really good, is it working in Unreal Engine 4?
Package includes a fbx file for Unreal Engine, if there's any additional support needed I'll be happy to help.
wow
Item rating
10 1
Recommended
Gorgeous model ! Probably the best Giga model available on CGT. Worth every penny ! Thank you ScorchingKami
Recommended
Top Asset!
Recommended
Recommended
I have bought several of Scorching Kami's models, and I am basically posting the same review for all of them: these are excellent models, with just the right level of detail for games. I really love the strong variation between skins for each model, and there is a very rich list of animations included. Everything works well in Unreal (I have not tried Unity, I assume there would be no issues there either). I have a hard time saying anything negative here, because for this price, honestly, these models are a steal. You're getting something that took dozens of hours of work, and the price you pay is the equivalent of about four-five hours of work paid at the US minimum wage (I don't know if you'd get even a single hour of a professional modeller/animator at this cost!). It might still be expensive, and I'll admit I'm buying these models slowly one by one (and waiting for a discount usually) because my indie game budget is too small to get them all at once - but that doesn't change the fact that the value for money is amazing. Nonetheless, there are a few small problems I want to point out, not so much as complaints, but as information for future buyers to keep in mind: - The models are scaled inconsistently (compared to one another). When I import into Unreal, some of the big dinosaurs need to be scaled at 0.7, others at different settings... and then there's the Ichtyostega and Diplocaulus which need to be reduced to 0.0035. I do wish the descriptions would include info about scale, but even better would be if the models were simply all at the same scale. - The naming schemes of the animations (and sometimes other files) are sometimes inconsistent between models, and also just plain could be more systematic. I do a lot of renaming when I import these, to bring them in line with a naming scheme that works for me, and to make sure all models have consistent naming. - Most of these models do not have root motion animation, and when they do, it's only for a few animations. At this price, it's hard to complain about that, but be prepared - if you need root motion, you will need to get an animator to rework these animations. - Each model comes with a big FBX with all animations built in, and a set where each animation is a separate FBX. This set is labelled Unreal, and there is a reason for that ;). Some of the big FBXes import fine into Unreal, but for others, you run into problems, which go away when you import the special Unreal set. Just keep that in mind. Overall, though, these issues are all tiny quibbles that can be fixed in the space of an hour. Given what you're getting overall, it's really hard to complain about that :).
Recommended
Giganotosaurus
$35.00
Save with CGTrader Credits
Royalty Free License
My PurchasesProceed to Checkout
The model is not available.
Giganotosaurus
$35.00
Save with CGTrader Credits
Royalty Free License
My PurchasesProceed to Checkout
The model is not available.
S