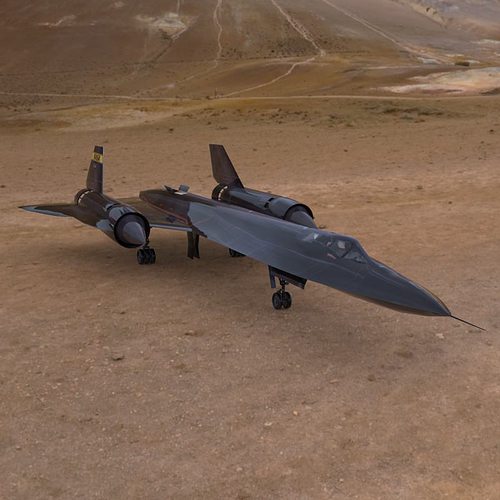 From Wikipedia:
The Lockheed SR-71 is an advanced, long range, Mach 3+ strategic reconnaissance aircraft developed from the A-12 and YF-12 aircraft as a Black project. The SR-71 was unofficially named the Blackbird.

In 1996, the Air Force moved to ground the program. The plane was permanently retired in 1998. The Air Force quickly disposed of their SR-71s, leaving NASA with the two last flyable Blackbirds until 1999. All other Blackbirds have been moved to museums except for the two SR-71s and a few D-21 drones retained by the NASA Dryden Research Center.

Product Features:
-Includes group information, which your software should interpret as separate parts and allow you to move the wing flaps, tailfins, landing gear, and canopy.
-Includes basic cockpit interior, which can be seen though the windows.
-Low-polygon pilot and co-pilot models are included so you don't have to add any human figures to the scene.
-Fully textured with texture maps, specular maps, and bump/ normal maps:
--NASA1: with a yellow stripe and black logo on the tail rudders.
--NASA2: with a white stripe and red logo on the tail rudders.
--Skunk: a skunk insignia on the tail rudders.
--Detailed texture maps for the instrumentation panels.

to SR-71 Spyplane in 3ds and obj formats