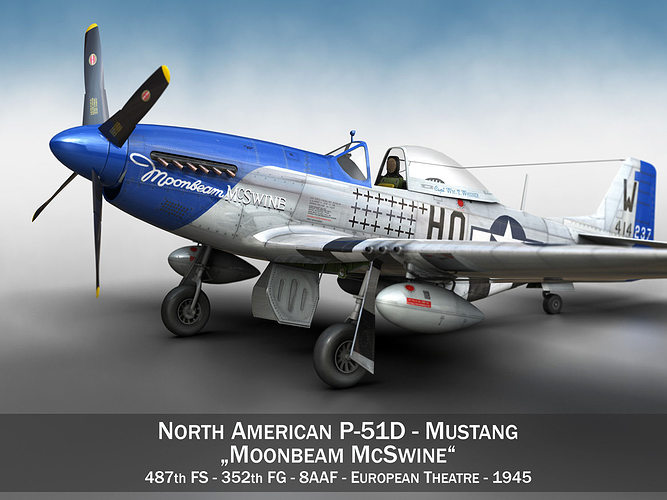 Features: - Inside scene: -model - 24 textures, 2 materials, 1 alphamap - No cleaning up necessary, just drop your models into the scene and start rendering. - No special plugin needed to open scene.

- NOTE - In lwo, obj and 3ds the Alphamap for the propellor (Run_Alpha) in the fly-version must manually load in the Materialcanal.

The North American Aviation P-51 Mustang was a long-range single-seat World War 2 fighter aircraft. Designed, built and airborne in just 117 days, the Mustang first flew in RAF service as a fighter-bomber and reconnaissance aircraft before conversion to a bomber escort, employed in raids over Germany, helping ensure Allied air superiority from early 1944. The P-51 was in service with Allied air forces in Europe and also saw limited service against the Japanese in the Pacific War. The Mustang began the Korean War as the United Nations main fighter, but was relegated to a ground attack role when superseded by jet fighters early in the conflict. Nevertheless, it remained in service with some air forces until the early 1980s.