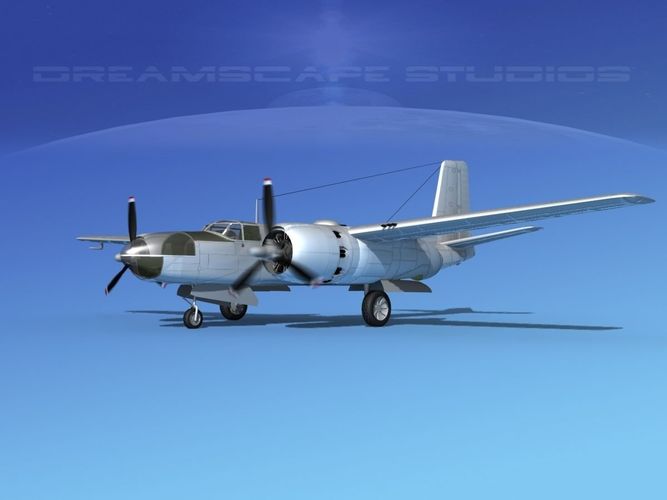 The Douglas A-26B, A-26C, B-26B, B-26C, and A-26K built by Dreamscape Studios are our latest high value models. These models are built near to scale (within a couple of percent in overall dimensions), fully painted and textured with realistic maps, and includes a great deal of detail. The model includes geometrically detailed radial engines (although the A and B-26 had twin row radials we only used a single row radial to keep poly count at a more reasonable level. Much of the cockpit, rear gunners position and in the C models the forward position have some detail and major components are modeled. The cockpit detail include seat, controls and instrumentation, rudder pedals and step down passage for the C models. These models also have animated propellers, animateable ailerons, elevators, flaps, inboard flaps, rudder, cowling flaps, landing gear retraction and landing gear doors.
This model is a completely new build in 2016. These models make an excellent video animation and animation model.

The Douglas A-26B Invader was a development of the Douglas company in the early 1940s to replace the Douglas A-20 bombers. The A-26 was also to replace the Martin B-26. It was imperative to Douglas to really design a winner. The A-26 was designed as a low level attack and bomber platform with 14 machine guns or combinations of machine guns and cannon. It also had an internal bomb bay and could deliver a good sized load of bombs. It was a fast airplane as far as twin-engine radial powered aircraft go and was rugged and reliable. These aircraft went into production in 1943 and were numerous at the front during the WWII.
The A-26B models were the “hard nose” models with a navigator/gun loader stationed in the forward cockpit with the pilot and a gunner in the rear. Eight machine guns were mounted in the nose. These were used for staffing and ground attack as well as supporting ground troops at low and medium level bombing missions. The A-26C model had the clear nose and the navigator bombardier was stationed in that nose. Machine guns remained in the wing and strafing was also part of its capability. After the war, these aircraft would remain in front line service with the USAAF and in 1948 the USAF. They were re-designated the B-26 in 1948 when the A or attack designation was abandoned.

During the Korean conflict the B-26B and C saw a lot of active service. The redesignated A-26 was to undergo a major upgrade with refinements in wing, structure, power plant, increased horsepower, external weapons store under the wings, tip tanks to increase fuel load and loiter time in combat areas. These were designated the A-26K The mid 1960s again saw active combat service for the A-26s in the Vietnam conflict. The A-26, and B-26 were also sold to other nations for use in their air forces. Some were sold surplus into civil use and to firms that would rebuild them into executive transports. Some were converted to fire fighter water tankers and others were destined for the museum and flying warbird for public display.