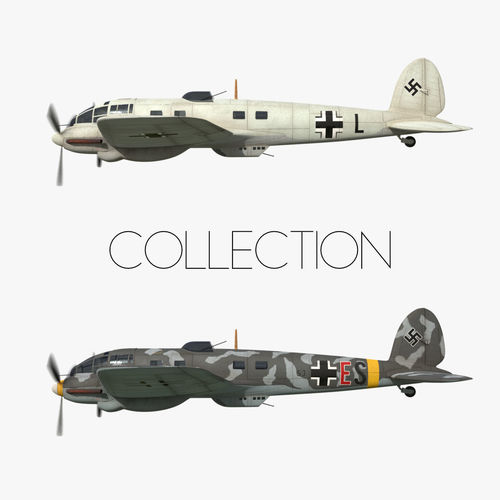 The Heinkel He.111 was a German bomber from the Luftwaffe used on many fronts in Europe during the WWII.

The model of a historical re-enactment of Major Werner Klümper's plane. This plane was integrated in the KG (Kampfgeschwader) 26 unit group. It was based in Bardufoss in Norway and it was in service during all autumn of 1942. This He.111 was used to bomb allied arctic convoys.

The model of a historical re-enactment of the coded L aircraft. This plane was integrated in the KG (Kampfgeschwader) 4 unit group under the commandment of General Wever. It was based in Norway and it was in service during the year of 1943. This He.111 was used to transport the staff.

The 3D model is ready for game and low poly using. All materials are ready for PBR rendering.

File formats don't include textures. All textures are in a specific folder named 'Textures' The model is rigged and animated for a cycle ration of propellers animations a wheels positions outside or inside the wings. The HDRI is not included.