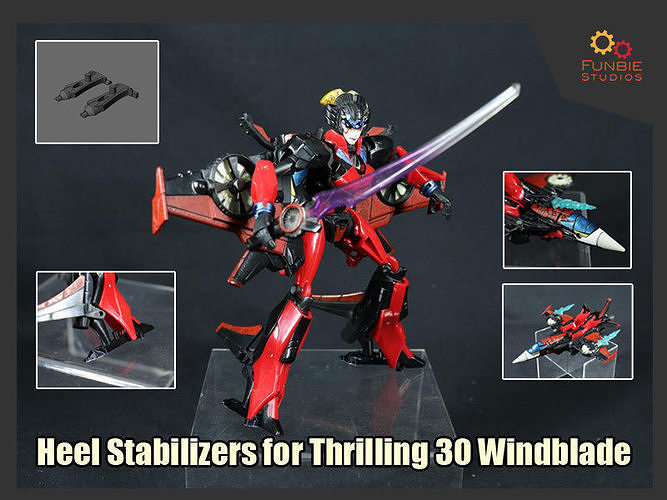 While taking the photos for the earlier Lanternbots, we got reminded again of how massively unstable Windblade's feet were! Her heels tend to want to flip close at the slightest movement, and the front of her leg would also oftentimes want to fold forward.

The annoyance was sufficient impetus to come up with some means of heel stabilization for Windblade so that this otherwise awesome looking bot be posed and displayed to her full potential! So here's (actually two) sets of heel stabilizers for her:

The main difference between the two types are in how they terminate at the rear - with the one set ending in a 3mm tip and then other ending with a 5mm port (more on how these are used later).

Regardless of either type, they are installed by having the end of Windblade's original heel fit into the notch in the middle, while the t-shaped front end tucks into the portion just behind the toe. This helps to secure the Windblade's shin to prevent it from flipping upwards.

With the heel stabilizers installed, Windblade would benefit from having a much more secure foot with more surface area, making it possible for more dynamic posing!

Coming over to her jet alt mode, there are multiple ways of stowing this addon also. After transforming her as normal, the two halves of either type of heel stablilizer can placed back to back to peg into several locations.

Using the Rectangular Peg, it can be fitted onto the sized notch in her mid section in alt mode making for a top mounted canon, with the 3mm peg on its end allowing for the addition of effect parts!

Another option would be to use the 3mm peg on the other end to mount it underneath the front cockpit, and again have an effect part pegged on the front. Below, we see the version with the 5mm port end in use.

Having the parts in separated, they can also be mounted on the two side turbines, and again with the used of effect parts, can be made to represent wing mounted laser weapons, or make for a over-the-wings jet stream look.

And so, if you also have this particular figure and face the same pain in getting her posed or keep having her knocked over whilst on the shelf, hope this addon will come in handy for you!

This model is not to be uploaded or sold in any form and is intended for personal use only.

Support us on Patreon - https://www.patreon.com/FunbieStudios | Full listing of Models - https://funbiestudios.com/model-catalog