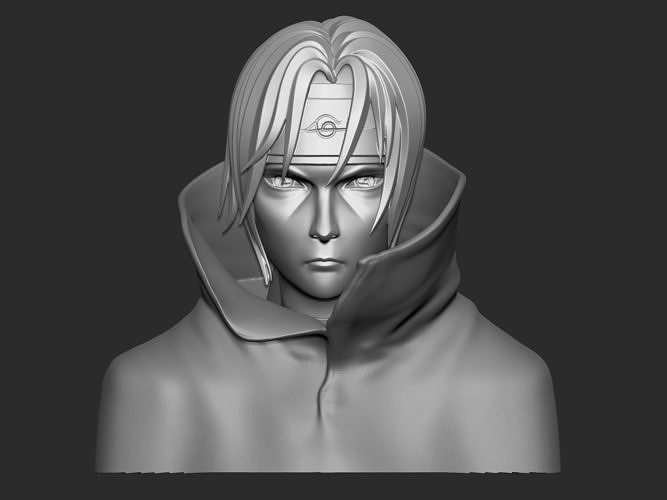 Itachi Uchiha (Japanese: うちは イタチ, Hepburn: Uchiha Itachi) is a fictional character in the Naruto manga and anime series created by Masashi Kishimoto. Itachi is the older brother of Sasuke Uchiha and is responsible for killing all the members of their clan, sparing only Sasuke. He appears working as a terrorist from the organization , Anbu and serves as Sasuke's greatest enemy. During the second part of the manga, Itachi becomes involved in terrorist attacks to ninjas possessing tailed-beast creatures until facing Sasuke in a one-on-one battle. Although Itachi perishes during the final duel, it is later revealed Itachi had a secret reason for assassinating the Uchiha clan. Itachi is a playable character in most of the video games from the series.

Itachi's character has been popular with readers of the manga,[6] and has been positively received by critics. His appearance as an antagonist has been praised by several writers, although some have considered his initial appearance to be unsurprising. The gradual revelations of his past and its impact on the story has also received positive reception,[7][8] and his fights were noted to be one of the best in the series.[9][10][11] Numerous types of merchandise have been released in Itachi's likeness, including keychains, plush dolls and figurines.

Itachi is a member of the Uchiha Clan from the village of Konohagakure and the elder brother of Sasuke Uchiha. He grew up as the child prodigy of the Uchiha clan, establishing milestones for not only Sasuke, but also for future Uchiha to live up to.[17] His early childhood was marred by war, the violence of which caused him to seek peace at any cost. Upon learning that his clan was planning a coup d'état to take control of Konoha, after his clan was accused of attacking the village with the Nine Tails, Itachi provides Konoha with intelligence on his clan's actions during his two years as a member of the ANBU. Over time, Itachi distances himself from his clan, as some clan members believed he murdered his best friend, Shisui Uchiha, to gain the Mangekyo Sharingan (万華鏡写輪眼, Mangekyo Sharingan, lit. Kaleidoscope Copy Wheel Eye).[18][19][20]

In reality, as Shisui possesses the ability to subliminally manipulate others and shares Itachi's love for the village, he intended to use his gift on the Uchiha clan leader to stop the coup d'état. However, Shisui is mortally wounded by the Leaf High Council member Danzo Shimura, who then takes his eye to achieve his own ideal of peace. When Shisui entrusts Itachi with his remaining eye, Itachi covers up Shisui's death to make it appear it was his doing. Eventually, in return for Danzo's offer to spare his younger brother, Itachi slaughters his entire clan.[21] After creating the misconception that he murdered their family in cold blood to give Sasuke the mindset to become strong enough to kill him once he is capable, Itachi leaves the village, although he warns Danzo not to harm Sasuke. Meeting up with Konoha's Third Hokage Hiruzen Sarutobi, who promises to do what he can to look after Sasuke, Itachi reveals his intentions to continue to protect the village from the shadows.[22] Soon after perceiving them as a threat to Konoha, Itachi joins the Akatsuki to ensure they do not endanger his village. Itachi becomes good friends with his partner Kisame Hoshigaki, who expresses concern for Itachi's wellbeing.[23]

Itachi debuts in Part I after Hiruzen's death, when he uses his infiltration of Konoha to hunt down Naruto Uzumaki as an excuse to secretly check on Sasuke's wellbeing.[24] After engaging with Kakashi Hatake and some of Konoha's forces, he reveals Akatsuki's goal to gather the Jinchuriki which are the people that contained the tailed beasts which there are nine of. Itachi also learns that Naruto is under the protection of Jiraiya and sets up a trap to lure the experienced ninja away to grab the boy.[23][25] However, as Jiraiya comes to Naruto's aid, Itachi finds himself facing Sasuke and directs his brother back on the path of getting stronger by defeating him before he and Kisame fall back.[26][27]

In Part II, Itachi uses one of Sasori's informants as a clone of himself to hold off Naruto and the rest of his team while he and the others seal away Shukaku the One Tail.[28] Itachi remains on the sidelines until learning that Sasuke has finally severed his ties to Orochimaru, having absorbed him and now being strong enough to settle matters. Prior to his fight with Sasuke, Itachi meets with Naruto and, after questioning his intentions to save Sasuke, ensures the youth's safety with a crow with Shisui's Sharingan (写輪眼, lit. Copy Wheel Eye, English manga: Mirror Wheel Eye) as a countermeasure against Sasuke if he gains his Eternal Mangekyo Sharingan and attempts to attack Konoha.[29] Sasuke ultimately tracks him down and they engage in their final battle, during the course of which he uses his Mangekyo Sharingan to push Sasuke to his limits. In doing so, Orochimaru is drawn out from Sasuke's body, and Itachi seals him away with his Totsuka blade before finally succumbing to his mysterious illness.[30] As his final act, Itachi implants his Amaterasu technique within Sasuke, meant as a protective measure that will kill Tobi in case he ever tries to approach Sasuke and reveal the truth of their clan's slaughter.[31] Unfortunately, having knew where Itachi's loyalties truly lie, Tobi survived and reveals the truth of Itachi's actions to Sasuke. This gives Sasuke a resolve to destroy the village, eventually having his brother's Mangekyo Sharingan implanted on him.[22]

Itachi reappears later during the Fourth Great Ninja War, brought back by Kabuto Yakushi using the Reanimation Jutsu, a forbidden summoning jutsu that brings the dead back as immortal corpses, to fight on Tobi's side.[32] Paired with Nagato and forced to fight Naruto and Killer Bee against his will, Itachi learns of his brother's intentions and summons the crow he gave Naruto to regain his free will.[33] After sealing Nagato,[33] Itachi heads out to stop Kabuto and encounters Sasuke, with his younger brother wanting to know the truth once it is over.[34][35]

After a long battle, Itachi is pushed to use Izanami to trap Kabuto in an eternal time-loop in his own mind, to have him break his jutsu.[36][37][38] His soul beginning to fade, Itachi uses his Sharingan to project his memories to Sasuke to reveal the full story of the events leading to the Uchiha Clan Massacre. Telling his brother that he does not have to forgive him, Itachi tells Sasuke that he will always love him, no matter what choice he makes from then on.[39] With his brother's parting words, and accepting defeat after his final battle with Naruto, Sasuke renounces destroying the village and devotes himself to protecting it, fulfilling Itachi's wish for his younger brother. Sasuke even adopts Itachi's habit of poking on the forehead as a sign of affection, which Sasuke does with his wife Sakura and their daughter Sarada Uchiha.[40][41]