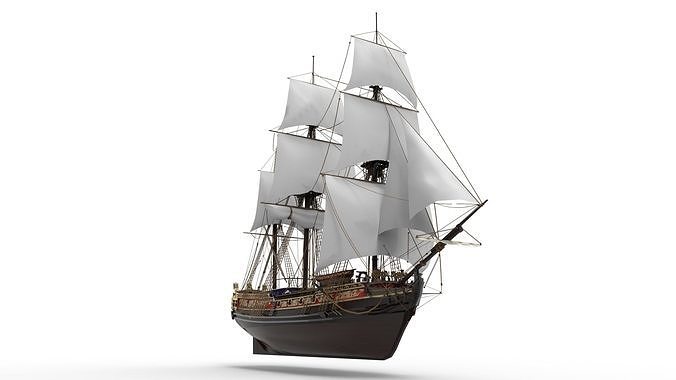 A sailing ship is a sea-going vessel that uses sails mounted on masts to harness the power of wind and propel the vessel. There is a variety of sail plans that propel sailing ships, employing square-rigged or fore-and-aft sails. Some ships carry square sails on each mast—the brig and full-rigged ship, said to be ship-rigged when there are three or more masts. Others carry only fore-and-aft sails on each mast, for instance some schooners. Still others employ a combination of square and fore-and-aft sails, including the barque, barquentine, and brigantine.

Early sailing ships were used for river and coastal waters in Ancient Egypt and the Mediterranean. Blue water sea-going sailing ships were first independently invented by the Austronesian peoples with the fore-and-aft crab-claw sail as well as the culturally unique catamaran and outrigger boat technologies. These enabled the rapid Austronesian expansion into the islands of the Indo-Pacific since 3000 BC from an origin in Taiwan, as well as facilitated the first maritime trading network in the Indo-Pacific from at least 1500 BC. Later developments in Asia produced the junk and dhow—vessels that incorporated innovations absent in European ships of the time.

European sailing ships with predominantly square rigs became prevalent during the Age of Discovery, when they crossed oceans between continents and around the world. In the European Age of Sail, a full-rigged ship was one with a bowsprit and three masts, each of which consists of a lower, top, and topgallant mast. Most sailing ships were merchantmen, but the Age of Sail also saw the development of large fleets of well-armed warships. The Age of Sail waned with the advent of steam-powered ships, which did not depend upon a favourable wind. The first sailing vessels were developed for use in the South China Sea by the Austronesian peoples, and also independently in lands abutting the western Mediterranean Sea by the 2nd millennium BC. In Asia, early vessels were equipped with crab claw sails—with a spar on the top and bottom of the sail, arranged fore-and-aft when needed. In the Mediterranean, vessels were powered downwind by square sails that supplemented propulsion by oars. Sailing ships evolved differently in the South China Sea and in the Indian Ocean, where fore-and-aft sail plans were developed into several centuries AD.

By the time of the Age of Discovery—starting in the 15th century—square-rigged, multi-masted vessels were the norm and were guided by navigation techniques that included the magnetic compass and making sightings of the sun and stars that allowed transoceanic voyages. The Age of Sail reached its peak in the 18th and 19th centuries with large, heavily armed battleships and merchant sailing ships.

Sailing and steam ships coexisted for much of the 19th century. The steamers of the early part of the century had very poor fuel efficiency and were suitable only for a small number of roles, such as towing sailing ships and providing short route passenger and mail services. Both sailing and steam ships saw large technological improvements over the century. Ultimately the two large stepwise improvements in fuel efficiency of compound and then triple-expansion steam engines made the steamship, by the 1880s, able to compete in the vast majority of trades. Commercial sail still continued into the 20th century, with the last ceasing to trade by c 1960.