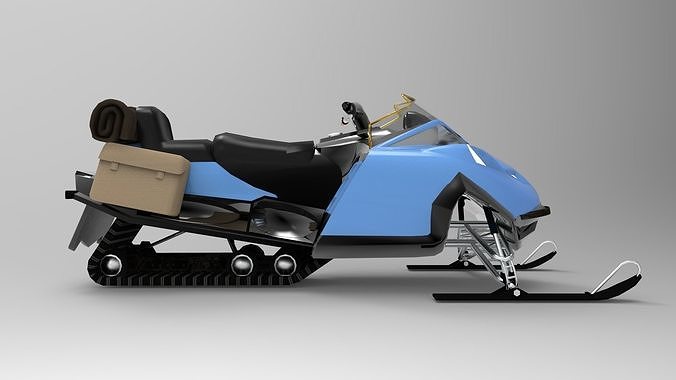 A snowmobile, also known as a Ski-Doo, snowmachine, sled, motor sled, motor sledge, skimobile, or snow scooter, is a motorized vehicle designed for winter travel and recreation on snow. It is designed to be operated on snow and ice and does not require a road or trail, but most are driven on open terrain or trails. Snowmobiling is a sport that many people have taken on as a serious hobby.

Early snowmobiles used simple rubber tracks, but modern snowmobiles' tracks are usually made of a Kevlar composite construction. The earliest snowmobiles were powered by readily available industrial four-stroke, air-cooled engines. These would quickly be replaced by lighter and more powerful two-stroke gasoline internal combustion engines and since the mid-2000s four-stroke engines have re-entered the market.

The second half of the 20th century saw the rise of recreational snowmobiling, whose riders are called snowmobilers, sledders, or slednecks. Recreational riding is known as snowcross/racing, trail riding, freestyle, boondocking, ditchbanging and grass drags. In the summertime snowmobilers can drag race on grass, asphalt strips, or even across water (see Snowmobile skipping). Snowmobiles are sometimes modified to compete in long-distance off-road races. In 1911 a 24 year old, Harold J. Kalenze (pronounced Collins), patented the Vehicle Propeller in Brandon, Manitoba, Canada.

In 1915 Ray H. Muscott of Waters, Michigan, received the Canadian patent for his motor sleigh, or traineau automobile, and on June 27, 1916, he received the first United States patent for a snow-vehicle using the now recognized format of rear track(s) and front skis. Many individuals later modified Ford Model Ts with the undercarriage replaced by tracks and skis following this design. They were popular for rural mail delivery for a time. The common name for these conversion of cars and small trucks was Snowflyers.

1921 Ford Model T snowmobile In 1935 Joseph Bombardier assembled and successfully tested the first snowmobile. It was a vehicle with a sprocket wheel and a track drive system, and it was steered by skis.

Snowmobile running on the Mississippi River near Hastings, Minnesota, 1910 The challenges of cross-country transportation in the winter led to the invention of the snowmobile, an all-terrain vehicle specifically designed for travel across deep snow where other vehicles foundered. During the 20th century, rapidly evolving designs produced machines that were two-person tracked vehicles powered by gas engines that enabled them to tow a sled or travel, initially at low-to-moderate speeds, depending on snow conditions, terrain and obstacles protruding above the snow like brush and trees. Where early designs had 10 horsepower (7.5 kW) two-stroke engines, there has been a move toward newer style two and four-stroke gasoline engines, some with over 200 hp (150 kW).