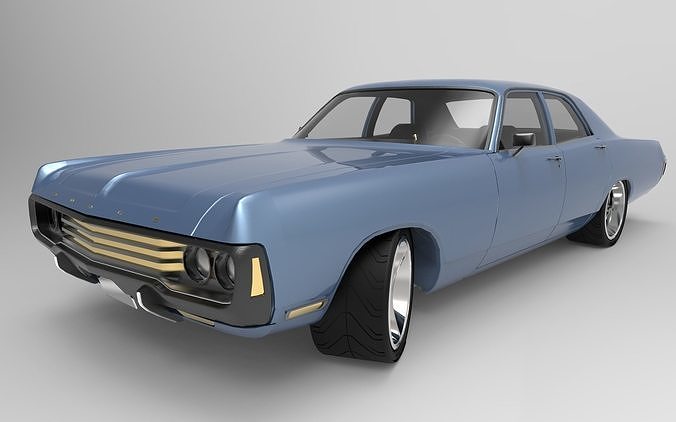 The Dodge Polara is an automobile introduced in the United States for the 1960 model year as Dodge's top-of-the-line full-size car. After the introduction of the Dodge Custom 880 in 1962, the Polara nameplate designated a step below the full-sized best trimmed Dodge model; the Polara that year had been downsized to what was in effect intermediate, or mid-size status. In its various forms, the Polara name was used by Dodge until 1973, when its position in Dodge's line-up was replaced by the Dodge Monaco.

The name Polara is a reference to the Polaris star, in a marketing attempt to appeal to the excitement surrounding the Space Race during the early 1960s.

For 1969, the Polara 500 was reintroduced as a mid-level series between the standard Polara and top-of-the-line Monaco. The Polara 500 was available as either a convertible or hardtop coupe. Available powerplants included 318, 383, and 440 cubic-inch V8 engines, along with a 225 cubic-inch slant-6 engine. The 1969 Dodge Polara models offered the Super-Lite option, which placed a quartz auxiliary turnpike beam headlamp in the driver side grille.[8]

In 1970, the Polara received new front and rear styling that included a bumper that wrapped around the grille and headlights. The Polara 500 was replaced by the Polara Custom in hardtop coupe, 4-door hardtop sedan, and conventional 4-door sedan body styles. There was also a stripped-down Polara Special available as either a 4-door sedan or station wagon. 1970 was the last year that the Polara would be available in a convertible body style (with a scant 842 produced, making it extremely rare today), and Dodge would never again offer a full-sized convertible. The early 1970 production featured a medallion rear bumper. This bumper was pictured in all of the sales literature, but was discontinued after late August or early September 1969 production and replaced with a plain bumper lacking the center Fratzog medallion. Dodge also discontinued the Super-Lite option at the end of the 1970 model year because of lack of consumer interest and challenges to its legality in some states. The 1970s also received a new locking steering column which locked the steering wheel and column shift lever when the ignition key was removed.

The 1972 model year featured a facelift with new sheet metal and the discontinuation of the Polara Brougham model. The 1973 models received new front-end styling (which resembled the big 1970 Chevrolet), without the previous wrap-around front bumper.

Sales of the Polara were declining. Having been eclipsed by the Monaco, Dodge discontinued the Polara after 1973. The energy crisis in the fall of 1973, spurred on by the Arab/OPEC oil embargo, resulted in a drop in sales of all full-size American automobiles that did not provide good fuel economy. The redesigned 1974 Monaco replaced the Polara.