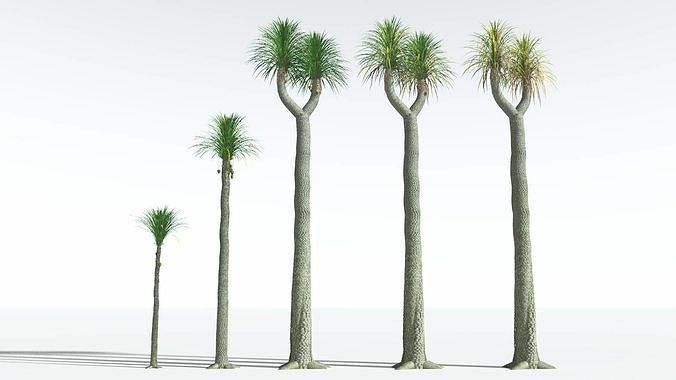 About this Package: This package contains an extended and extensive series of staged models representing the entire lifecycle of a single plant. It includes staged models for maturity and health. There are a total of 24 models. This same species can also be founded in 12 seperate variations containing a subset of these staging models (and may also contain some additional model variations); look for them in the EVERYPlant store. The exact plant variation in this extended package is unique and cannot be found in any of the other package.

Habitat: Extinct tree-sized lycopsids from the late Carboniferous to the early Permian Period (about 380 to 255 million years ago). It appears to have preferred the mineral soils of river floodplains. This preference for better-drained soils may have allowed it to survive the drying of the great coal swamps that led to the extinction of many tree-sized lycopsids during the middle of the Pennsylvanian Epoch (318 to 299 million years ago).

Notes: Sigillaria had a single trunk, which in older plants often branched to a characteristic Y-shape. Very old plants may further branch. The trunk lacked wood, or had a very slender layer only. Support came from a layer of closely packed leaf bases just below the surface of the trunk, while the center of the trunk was filled with pith. The trunk had photosynthetic tissue on the surface, meaning that it was probably green. Long, thin leaves grew in a spiral along the trunk but persisted only near its growing tip; on lower portions of the plant, where the leaves had fallen off, characteristic polygonal leaf scars remained.

Included in this Package: 24 models in total

The textures included in this pack are mainly 4k (4096x4096) to cater for detailed renders, this is the default map size and is included in each of the file format download files, no need for seperate downloads. However these may be slow to load or render on some system and may not be necessary in all situations. To allow for this, medium 2k, small 1k, and tiny <1k textures are also available and may be downloaded alongside the various model formats. Different texture sizes can simply be swapped in or out by copying the Maps sub-folder; no need to manipulate the materials in your editor. Please use whichever best suites your system and needs.