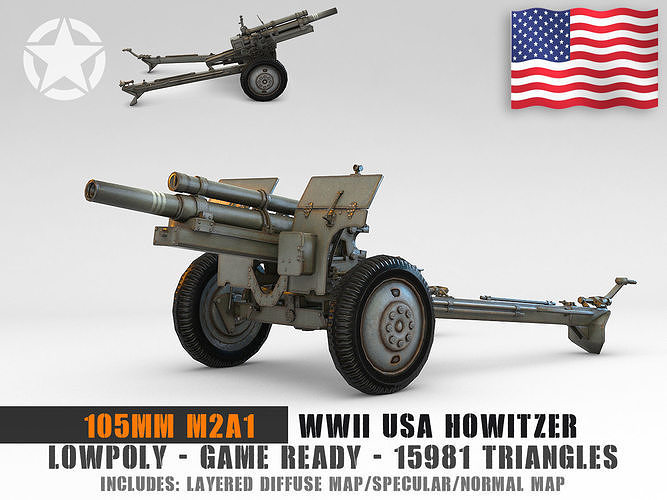 Texture designed for scaling - great for mobile games. Textures can be used in unlit mode

"After World War I, the U.S. Army Ordnance Department studied various captured German 105 mm-caliber howitzers and developed the 105 mm Howitzer M1920 on Carriage M1920. A box trail carriage design (the M1925E carriage) and two other split trail designs (the T1 and T2) were also developed, but the original split trail design was found superior after testing. After being selected, the piece was standardized in December 1927 as the 105 mm howitzer M1 on carriage M1. The Army had an intention to replace all 75 mm gun-howitzers in its divisional and non-divisional field artillery regiments with 105 mm pieces, but a lack of appropriations stalled the idea and eventually forced it to be completely abandoned by 1929; a limited plan developed in 1925 envisioned re-equipping three regiments, but by 1933, only 14 M1 howitzers had been manufactured,

A modified version of the M1 was trialed in 1932 which used semi-fixed ammunition instead of separate-loading ammunition. Since this development required a different breech block, the new piece was designated the 105 mm howitzer M2 on carriage M1. 48 pieces were manufactured in 1939. The original M1 carriage had been designed for towing using horses rather than trucks, and a new carriage, the T5 (M2), was developed in 1939 and standardized in February 1940. The breech ring of the howitzer M2 was modified in March 1940 before large-scale production began, creating the 105 mm howitzer M2A1 on carriage M2.[1]

The weapon was heavy for its calibre but this was because the gun was designed to be durable. Thus the barrel and carriage could see great use and remain functional without wearing out.[2]

The U.S. military artillery designation system was changed in 1962, redesignating the M2A1 howitzer the M101A1. The gun continued to see service in the Korean and Vietnam Wars. Though a similar model, the M102 howitzer, shared the same roles in battle, it never fully replaced the M101A1. Today, the M101A1 has been retired by the U.S. military, though it continues to see service with many other countries. By the end of the Second World War, 8,536 105 mm towed howitzers had been built and post-war production continued at Rock Island Arsenal until 1953, by which time 10,202 had been built."

I declare that I am the author of the presented model, all elements have been modeled and textured by me based on publicly available references.