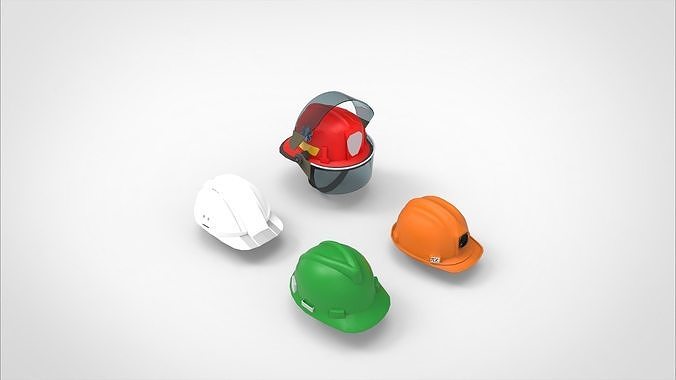 A hard hat is a type of helmet predominantly used in workplace environments such as industrial or construction sites to protect the head from injury due to falling objects, impact with other objects, debris, rain, and electric shock. Suspension bands inside the helmet spread the helmet's weight and the force of any impact over the top of the head. A suspension also provides space of approximately 30 mm (1.2 inches) between the helmet's shell and the wearer's head, so that if an object strikes the shell, the impact is less likely to be transmitted directly to the skull. Some helmet shells have a mid-line reinforcement ridge to improve impact resistance. The rock climbing helmet fulfills a very similar role in a different context and has a very similar design.

A bump cap is a lightweight hard hat using a simplified suspension or padding and a chin strap. Bump caps are used where there is a possibility of scraping or bumping one's head on equipment or structure projections but are not sufficient to absorb large impacts, such as that from a tool dropped from several stories. In the early years of the shipbuilding industry, workers covered their hats with pitch (tar), and set them in the sun to cure, a common practice for dock workers in constant danger of being hit on the head by objects dropped from ship decks.

Management professor Peter Drucker credited writer Franz Kafka with developing the first civilian hard hat while employed at the Worker's Accident Insurance Institute for the Kingdom of Bohemia (1912), but this information is not supported by any document from his employer. In the United States, the E.D. Bullard Company was a mining equipment firm in California created by Edward Dickinson Bullard in 1898, a veteran of the industrial safety business for 20 years. The company sold protective hats made of leather. His son, E. W. Bullard, returned home from World War I with a steel helmet that provided him with ideas to improve industrial safety. In 1919 Bullard patented a hard-boiled hat made of steamed canvas, glue and black paint. That same year, the U.S. Navy commissioned Bullard to create a shipyard protective cap that began the widespread use of hard hats. Not long after, Bullard developed an internal suspension to provide a more effective hat. These early designs bore a resemblance to the steel M1917 Brodie military helmet that served as their inspiration.

MSA introduced the new non-conductive thermoplastic, reinforced Bakelite-based Skullguard Helmet in 1930. Able to withstand high temperatures and radiant heat loads in the metals industry up to 350 °F (177 °C) without burning the wearer, it was also safe around high-voltage electricity. Bakelite was used to provide protection rigid enough to withstand hard sudden impacts within a high-heat environment but still be light enough for practical use. Made of a Bakelite resin reinforced with wire screen and linen, the Skullgard Helmet is still manufactured in nearly two dozen models in 2021. MSA also produced a low-crown version for coal miners known as Comfo-Cap Headgear, likewise offered with fittings for a headlamp and battery.

On the Hoover Dam project in 1931, hard hat use was mandated by Six Companies, Inc. In 1933, construction began on the Golden Gate Bridge in San Francisco California. Construction workers were required to wear hard hats, by order of Joseph Strauss, project chief engineer. Strauss strove to create a safe workplace; hence, he installed safety nets and required hard hats to be worn while on the job site. Strauss also asked Bullard to create a hard hat to protect workers who performed sandblasting. Bullard produced a design that covered the worker's face, provided a window for vision and a supply of fresh air via a hose connected to an air compressor. The MSA Skullgard was the best, but quite expensive. Many hard hats were made of cheaper steel. Lighter affordable aluminum became popular for hard hats around 1938, except for electrical applications.

Fiberglass came into use in the 1940s.

MSA V-Gard Helmet with Fas-Trac suspension Injection molded thermoplastics appeared in the 1950s, and began to dominate in the 1960s. Easy shape with heat, it is cost-effective to manufacture. In 1952, MSA offered the Shockgard Helmet to protect linemen from electrical shock of up to 10,000 volts. In 1961, MSA released the Topgard Helmet, the first polycarbonate hard hat. 1962 brought the V-Gard Helmet, which today is the most widely used hardhat in the United States. Today, most hard hats are made from high-density polyethylene (HDPE) or advanced engineering resins, such as Ultem.

In 1997, ANSI allowed the development of a ventilated hard hat to keep wearers cooler. Accessories such as face shields, sun visors, earmuffs, and perspiration-absorbing lining cloths could also be used; today, attachments include radios, walkie-talkies, pagers, and cameras