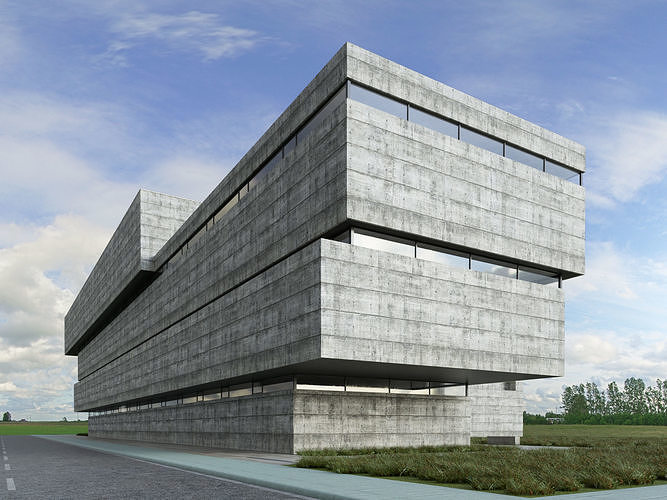 Low/mid poly model, quads and a few tris only (no ngons). Optimal for both high-end visualization and games or real-time engines (UE4 .uassets provided) Basic interior, not intended for full access.

There are 22 descriptively named objects (Inside: ceiling, floor, glass, partitions; Outside: ceiling, doors, facade, frames, glass, ramp, roof; Surround: lawn, pathway, road, sidewalk) that are organized within the same layer structure. The model is developed in a detail-based object arrangement, so you can easily decrease the poly-count deleting non-essential objects.

PBR Vray materials for all objects (diffuse, glossiness, base reflection and normal maps) Meaningfully named. There are 65 texture maps, PNG format, from 1024x1024 to 4K resolution, 2K mainly used. All textures have their paths stripped from the model in order to prevent linking issues. Maybe some textures should be relinked when using exchange formats as Alembic, USD or OBJ, due to their exporting and importing limitations regarding PBR materials.

Unreal Engine .uassets added, with collision set up. The static lighting has been calculated with medium build quality within a provided test level for fine tune these assets inside the Unreal Editor.

Cycles used for previews, night lighting and cameras setups. The HDR images used for lighting the scene are not included, but an ordinary HDR studiolight included with Blender is set up for out-of-the-box renders.

USAGE: For Unreal Engine 4 (UE4), download the corresponding package and place the unzipped LMOL directory inside your Unreal Projects folder, or place the LMOL folder under Content in the Content folder of your destination project. For packages other than Unreal, download the textures and the file format you need and put them together in the same folder before opening the files.