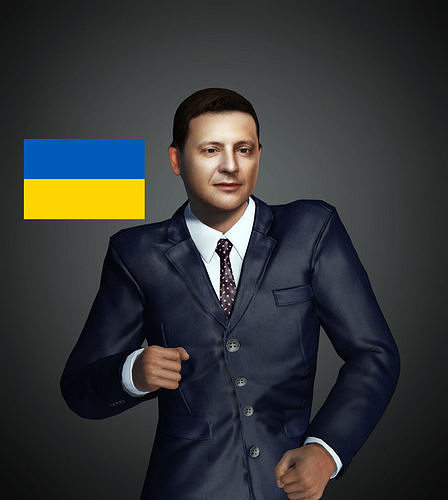 Products includes textures (Roughness/Metallic); 3d model has UVs .iAvatar .Fbx .Obj Textures.rar You can contact me with any questions or problems.

Zelensky redirects here. For other uses, see Zelensky (surname). In this Eastern Slavic naming convention, the patronymic is Oleksandrovych and the family name is Zelenskyy.

Volodymyr Oleksandrovych Zelenskyy[a] (Ukrainian: Володимир Олександрович Зеленський, pronounced [woloˈdɪmɪr olekˈsɑndrowɪdʒ zeˈlɛnʲsʲkɪj]; born 25 January 1978) is a Ukrainian politician, actor and comedian who is the 6th and current president of Ukraine, serving since May 2019.

Prior to his acting career, Zelenskyy obtained a degree in law from Kyiv National Economic University. He then pursued comedy and created the production company Kvartal 95, which produces films, cartoons, and TV shows including Servant of the People, in which Zelenskyy played the role of president of Ukraine. The series aired from 2015 to 2019 and was immensely popular. A political party bearing the same name as the television show was created in March 2018 by employees of Kvartal 95.

Zelenskyy announced his candidacy for the 2019 Ukrainian presidential election on the evening of 31 December 2018, alongside the New Year's Eve address of President Petro Poroshenko on 1+1 TV Channel. A political outsider, he had already become one of the frontrunners in opinion polls for the election. He won the election with 73.2% of the vote in the second round, defeating Poroshenko. Identifying as a populist, his achievements include dissolving parliament and winning a legislative election landslide, managing the COVID-19 pandemic and subsequent economic recession, and tackling corruption in Ukraine.

In recent years, critics of Zelenskyy claim that his government has taken an authoritarian turn,[3] citing an increase in corruption and democratic backsliding.[4]