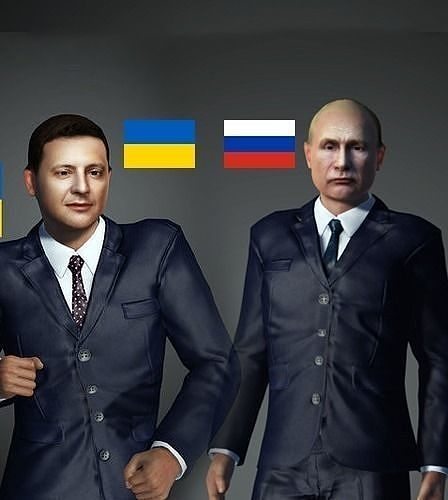 Presidents Vladimir Putin, Zelenski Presidents 3D Model All in One

You can contact me with any questions or problems.

Who Zelenski Presidents ? Volodymyr Oleksandrovych Zelenskyy[a] (Ukrainian: Володимир Олександрович Зеленський, pronounced [woloˈdɪmɪr olekˈsɑndrowɪdʒ zeˈlɛnʲsʲkɪj]; born 25 January 1978) is a Ukrainian politician, former actor and comedian who has been serving as the president of Ukraine since 2019. Zelenskyy grew up in Kryvyi Rih, a Russian-speaking region in south-east Ukraine.[3] Prior to his acting career, Zelenskyy obtained a degree in law from Kyiv National Economic University. He then pursued comedy and created the production company Kvartal 95, which produces films, cartoons, and TV shows including Servant of the People, in which Zelenskyy played the role of president of Ukraine. The series aired from 2015 to 2019 and was immensely popular. A political party bearing the same name as the television show was created in March 2018 by employees of Kvartal 95. Zelenskyy announced his candidacy for the 2019 Ukrainian presidential election on the evening of 31 December 2018, alongside the New Year's Eve address of President Petro Poroshenko on 1+1 TV Channel. A political outsider, he had already become one of the frontrunners in opinion polls for the election. He won the election with 73.2% of the vote in the second round, defeating Poroshenko. Identifying as a populist, he has positioned himself as an anti-establishment, anti-corruption figure. Who Vladimir Putin ? Vladimir Vladimirovich Putin (/ˈpuːtɪn/; Russian: Владимир Владимирович Путин, [vɫɐˈdʲimʲɪr vɫɐˈdʲimʲɪrəvʲɪtɕ ˈputʲɪn] (About this soundlisten); born 7 October 1952) is a Russian politician and a former officer of the KGB who has served as President of Russia since 2012, previously being in the office from 1999 until 2008.[6][c] He was also Prime Minister of Russia from 1999 to 2000 and again from 2008 to 2012.

Putin was born in Leningrad (now Saint Petersburg) and studied law at Leningrad State University, graduating in 1975. Putin worked as a KGB foreign intelligence officer for 16 years, rising to the rank of Lieutenant Colonel, before resigning in 1991 to begin a political career in Saint Petersburg. He later moved to Moscow in 1996 to join the administration of President Boris Yeltsin. He served as Director of the Federal Security Service (FSB) and Secretary of the Security Council, before being appointed as Prime Minister in August 1999. After the resignation of Yeltsin, Putin became Acting President, and less than four months later was elected outright to his first term as president and was reelected in 2004. 'Wikipedia'