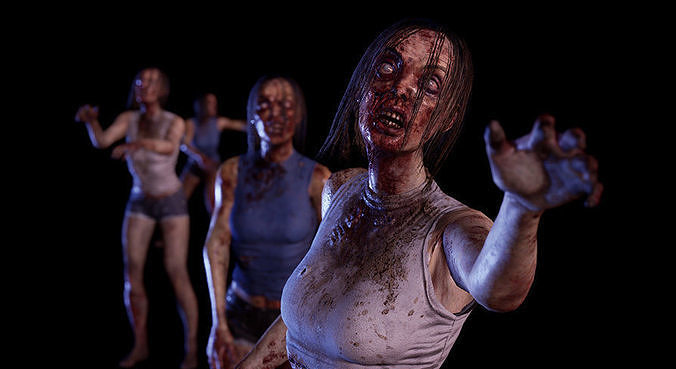 Maya 2022 file included, exported FBXs included Advanced Skeleton Rig About 15 000 tris Two versions of the geometry, one with One mesh, and version separated to Body Parts

Substance painter Mesh maps, so you can make your own materials!(Normal, Curvature, Position, World Space) Clean textures witout scars/blood/dirt, so you can customize in Substance Painter or other package! Textures for Arnold, Unity3D, Unreal Engine, Document Channels and PBR Metallic Roughness

NO ANIMATIONS IN THE PACKAGE!

Model has two variants - first is with one part geometry - about 15000 tris.

Second is divided by body parts to be used with dismemberment systems of your choice. It is about 15500 tris.

Model has Open Mouth and Angry blendshapes for easier mouth and expression control. They can be combined.

Eyes also have bones and can be moved.

The model has NO animations included! It is however Mecanim Ready, so you can use MoCap or other Mecanim compatible animations to live her up.

You can see a test using ZOMBIE Starter: MoCap Animation Pack by Motion Capture Online in the video bellow. They have Pro and Basic packs also, check them out!

Skinned and rigged to Epic skeleton.

Two geometry variants are included - One mesh model and the model broken to body parts, to be used with dismemberment systems.

Included are two example blueprints, based on Third Person BP by Epic. (One mesh BP, and Body Parts BP)

The video uses Zombie Basic - MoCap Pack . They have more Zombie Packs, check them out!

Technical Details Features: (Please include a full, comprehensive list of the features of the product)

Number of Materials and Material Instances: 2 materials for model, Hair and Body, each with two skin variants