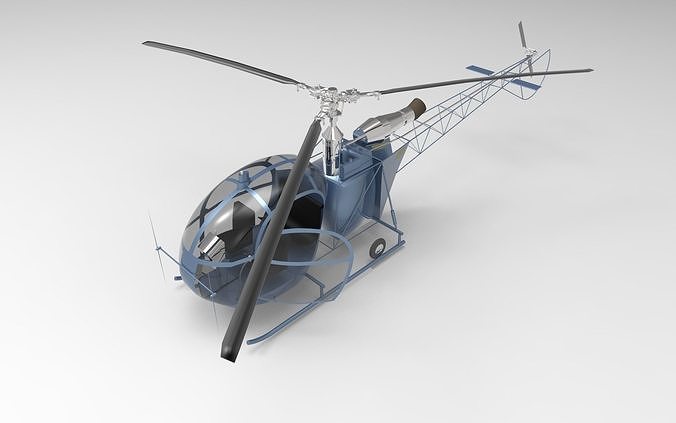 The Aérospatiale Alouette II (French pronunciation: ​[alwɛt], Lark; company designations SE 313 and SA 318) is a French light helicopter originally manufactured by Sud Aviation and later Aérospatiale. It was the first production helicopter powered by a gas turbine engine instead of the heavier conventional piston powerplant.

On 12 March 1955, the prototype SE 3130 performed its maiden flight. The Alouette II was a widely used type and popular with operators, with over 1,300 rotorcraft eventually being constructed between 1956 and 1975. The type was predominantly used for military purposes in observation, photography, air-sea rescue, liaison and training, but it has also carried anti-tank missiles and homing torpedoes. As a civilian helicopter, the Alouette II has been used for casualty evacuation (with two external stretcher panniers), crop-spraying and as a flying crane, with a 500-kilogram (1,100 lb) external underslung load.

A high-altitude derivative, the SA 315B Lama, was developed and entered operational service in July 1971. The Alouette II also was further developed into the larger and more powerful Alouette III. In 1975, production of the type was terminated, having been effectively succeeded by these newer rotorcraft. Despite it being long out of production, considerable numbers of Alouette II were still in service at the start of the 21st century. The Aérospatiale Alouette II is a French light helicopter, incorporating many innovations of its time. It was powered by a single Turbomeca Artouste II turboshaft engine capable of generating a maximum output of 400 hp. The speed of the main rotor is controlled by an automated fuel supply governor, eliminating the necessity of a twist-grip throttle and a conventional link between the throttle and the collective-pitch.[7] Instead, the Alouette II uses a simple control lever arrangement, which acts to directly regulate the collective-pitch and actuate the governor while immediately and automatically applying the correct level of power to conform with flight condition. Without a clutch, the transmission is considerably simplified in both design and maintenance aspects.

Despite being a light helicopter, the Alouette II possesses a reasonable lift capacity and can carry underslung loads on an external sling; during one high-profile public demonstration, one helicopter was able to air-lift a compact Citroen truck weighing in excess of half a ton without visible difficulty. While flying at sea level, the Alouette II uses only 300 of the powerplant's available 400 hp; accordingly, performance can be maintained while operated at a high altitude and within tropical conditions where the additional power would come into play. It was capable of flying at altitudes of up to 2,286 meters above sea level while possessing an average climb rate of 250 meters per minute and a typical maximum range of 563 miles. Various alternative landing gear configurations could be fitted, including skids, wheels, or pontoons.

The Alouette II is capable of accommodating a seating arrangement for up to five personnel, including the pilot; access to the cabin was provided via a pair of side-hinged doors. The compact cockpit was provided with a dome-shaped windscreen which provided for excellent levels of external visibility.[12] The Alouette II also made innovative use of armaments. It was the first helicopter worldwide to be equipped with anti-tank munitions in the form of the SS.11 MCLOS wire-guided anti-tank missile. In addition to anti-tank missiles, the French Army chose to arm their Alouette IIs with machine guns, while the French Navy outfitted theirs with aerial torpedoes to conduct anti-submarine warfare (ASW) duties.

Under operational conditions, the Alouette II often proved to be a relatively maintenance-intensive rotorcraft.[14] It required a high level of regular lubrication, the main rotorhead alone featuring 20 grease nipples that had to be re-lubricated after every five flight hours, while the drive shaft for the tail rotor was similarly demanding. Due to its high susceptibility to dust ingestion, some operators would have to remove the Alouette's rectangular sand filters after every landing in order to clean them.